I have always been small-sized my entire life, and obviously I’ve never as so much gotten into a fight before. The closest contact sport that I can think of was having participated in inter-class rugby competition in secondary school, but even so, everyone was still quite gentle. Because, girls’ school. Haha. So when Juggernaut Fight Club (JFC) invited me down for a trial beginners’ class in boxing, I was super hesitant to pick it up.

My thought process went something like, “Omg, boxing? Don’t want lah, so violent…..” while breaking out in cold sweat. Lol.

After much encouragement from Eliz, who is very active in dance sports like pole and aerial silk/hoop, I decided to JUST GIVE IT A TRY. Haha. Little did I know that I did not regret my decision to go after all!

Train with the best at Juggernaut Fight Club

I knew I was in good hands when I found out that the coach for the lesson was going to be Nurshahidah ‘The Sniper’ Rosli, who is Singapore’s first professional female boxer and champion. She represented Singapore in SEA Games from 2009 till 2015, and was then hand-picked by her coach, Arvind Lalwani, to train and debut as a professional boxer.

Watch a video of the exciting match over at Juggernautfightclub.com.

And guess what? National boxing and kickboxing coach, Arvind Lalwani, is the owner and head-coach of JFC! He is also the president of Singapore Fighting Championships, and coaches many Singapore’s best fighters. So imagine, when you train at JFC, you’re literally training with the best. There’s no doubt about that.

The number of belts and trophies tell it all – from humble beginnings in 2011 to producing champions in 2017.

Their new premises at Syed Alwi Road features state-of-the-art facilities like an MMA cage, a competition-sized boxing ring, Dollamur mats, and 20 punching bag stations, as well as a monkey bar and designated strength and conditioning area.

Besides the gym, there is also a members-only air-conditioned space with sofas and a 50-inch television for resting and bonding for the members.

Our experience at the brand new All-Women Boxing Class

The 1 hour lesson covered basic stance, footwork (moving left, right, front, back), throwing left and right hand punches, interactive sparring with a partner, and cool-down exercises. It was a really good cardio workout as we bounced continuously from left to right and back.

You’ll discover a lot about your body and coordination, like how you must ALWAYS keep your chin down (to protect the neck) while still keeping an eye on your opponent at all times. There’s also the foot twist – threatening to throw you off balance – that you must perform in a swift motion when punching with your non-dominant hand.

Nope, we did not get to try punching these huge bags, but it’s still fun to throw air punches at them. Lol.

Haha my main problem was that I was unable to keep my chin down, as my opponents are all taller than me during our friendly sparring! But Nurshahidah encouraged me, and offered the insight that taller opponents may actually have more tendencies to leave their bodies open to attacks, while shorter fighters are more compact and protected. I felt a lot less conscious about my small frame and height after that. :) All hope is not lost for short people!!

Eliz realised that different groups of muscles were utilised for boxing as compared to pole or aerial dances. It was a good workout and coordination training session for her! Thank you for coming along with me! :)

From the way the lesson was conducted, I think Nurshahidah has the ability to put her students at ease, and to guide them to the right mindset needed for such a high-intensity sport. She is also able to put herself in the student’s perspective and offer the right advice. There are no airs to her – even though she’s a champion! – and she comes across as affable and down-to-earth. It was a real privilege to be coached by her! <3

One thing is that, although the class is called an all-women class, it is likely that males will be present in the gym as well while the class goes on. They are usually doing self-training or private lessons. It’s not exactly girls-exclusive. So girls who mind that, do take note!

Lastly, click to watch how we throw our punches! Also, you can see how small I am…

Thank you JFC for the invite, and thank you Nurshahidah for showing us a glimpse into the world of boxing! :)

Established in 2011, Juggernaut Fight Club (JFC) is a premier fight gym that embraces fight sports as an alternative way of fitness as well as producing some of the best fighters in Singapore and South-east Asia. Led by our Director and Head Coach, Arvind ‘The Juggernaut’ Lalwani, our international team of specialist trainers, bring with them a lifetime of experience and knowledge in technical guidance and physical training. The 6 martial disciplines of Boxing, Muay Thai, Brazilian Jiu-Jitsu, Wrestling, Dutch kickboxing and Mixed Martial Arts (MMA) on offer will allow trainees endless cross-training possibilities as they work on technical skills and physical conditioning. Our tailored programs will dish out a training menu that will work you physically the way a fighter does.

(Disclaimer: Eliz and I were invited to attend the class, but all thoughts are our own.)

Here’s how I save money: Enjoy 1-for-1 treats with The Entertainer App!

What happened to my eyebrow embroidery after 2 years? 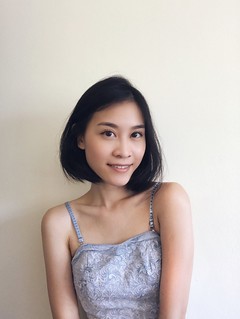 Welcome to Mypeaceofheaven. This is where I blog about beauty products, DIY projects, and my #girlboss journey in running a sewing studio in Singapore.